Do you ever have those moments as a parent where you know “At least I got that moment right?”

Lately I’ve been feeling that it was becoming all too easy to plop Lilly into her bouncer with a snack and pop on a movie when I really needed to get something done.  She was safe, occupied, and quiet. Otherwise, she was sure to be underfoot or getting into trouble…which generally results in nothing getting accomplished, an unhappy Lilly Grace, and a frustrated mommy!

A couple of days ago I wanted to prep dinner in the early afternoon.  This way it would be ready to pop in the oven when we returned home from Trinity’s after-school ballet class.  Lilly was up from her nap and while she frequently plays very nicely on her own, mommy being in the kitchen seems to set off a need in her, to be in my way.  Pushing and pulling on my legs or getting into kitchen drawers are some of her favorite “Mommy is trying to make dinner” activities.

As I began to think of what movie to put on for her, something clicked in my head. “I just don’t want to be putting my kid in front of movies all day long! What kind of a mother am I?!” I’m not saying that kids should NEVER watch T.V. (The entire house benefits from Lilly’s 30-40 minutes of early morning TV. Mommy gets her coffee and time in the Word, and Trinity gets to sleep in later since her sister is quiet.)  But I was unhappy with the frequency that I had started to rely on videos in order to get things done. So I decided to try something new.

I put Lilly in her high chair (MUCH to her chagrin initially!) facing the counter where I would be working. Then I gave her some bowls with a little dried pasta and some rice to start with. Yes, this would be messy, but I have to sweep under her high chair daily anyways, so what did it matter if there was a slightly larger mess to clean up? I began to make our dinner, which happened to be Sweet and Sour Meatballs. As I added things to my bowl, I added things to hers (not raw meat or onions, mind you!). Panko bread crumbs, a SMALL amount of brown sugar, a few herbs. Lilly stirred, poured, and touched her ingredients to her heart’s content! She even, as any good chef would do, sampled her ingredients from time to time. The expression on her face indicated that raw pasta, rice and bread crumbs, do NOT a palate pleaser make…but she lost no enthusiasm for her “cooking.” I even took out the “leak proof thingy” (yes, I believe that’s the official name) from her sippy cup and let her see what would happen when she sprinkled water onto her breadcrumbs. She played happily for 40 minutes!! Anyone who has a toddler (or knows mine, in particular!) knows that focusing on one thing for that long is nothing short of a small miracle. 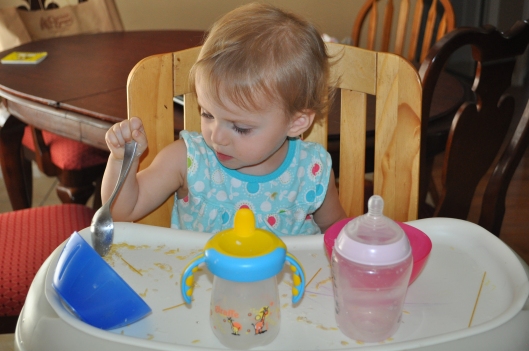 Lilly with all her bowls, pouring, and stirring utensils.

When she was done I reached for the broom, but Lilly insisted on “cleaning” up her own mess.  That took another 30 minutes of her time.  Dinner got made, Lilly had some experiential play time “with” mommy instead of a video, and I had one of those “WHY didn’t I think of this before?!” moments.  Simply giving her toys or books while I tried to cook has never worked, but I think the difference was, she felt a part of the experience I was involved in.  I seem to have found myself another little cooking partner.  Next time I’m thinking: peanut butter, rolled oats, and dried cranberries?

2 thoughts on “Reforming My Ways”