She was eight feet from me. Handcuffed and seated on a bench resembling an old church pew, she was not what I expected. I was startled by how old she was. I expected someone young, street-hardened, and defiant. Her sunken, vacant eyes were mostly downcast but occasionally glanced around the tiny courtroom.  They conveyed little emotion and whatever impressions were left upon me were difficult to read. Did she feel remorse for selling her daughter? Or was she simply sorry she got caught?

My own emotions were as unexpected as her appearance. I shamefully confess to an uncouth fascination when we were told, minutes before entering the courtroom, one of IJM’s perpetrators was inside. She was awaiting her preliminary hearing where a judge would decide if there was enough evidence to have a full trial. I anticipated righteous anger would wash over me upon seeing her. But it wasn’t anger or rage that I felt. It was sadness that welled up inside me; overwhelming sadness as I thought about her brokenness. What on earth brought her to this moment in her life? Had she also been sold as a child? If the creep who paid to have sex with her daughter had been present, my reaction would likely have been very different. But looking at her small frame, on the corner of that bench, I just felt sad.

Sadness changed to frustration as we left the courthouse and learned that this was the EIGHTH time Sonya, one of IJM’s lawyers, had gone to the court for this particular preliminary hearing. Because of the way Dominican law works, the mother and the man who paid to rape her daughter are co-defendants. Their cases are tied together. Between the two of them, they managed to delay their preliminary hearing seven times already. Today, the man was, again, a no-show. Did he feign illness again? Did the prison guards neglect to transport him from prison to the court-house? Stalling like this is a tactic frequently used by perpetrators in hopes of tiring out the justice system and having their case dropped. The goal is to wear down the prosecutor. Every time they don’t show up it is another month or two before their case can be put on the docket again. As exasperating as this tactic may be, these two criminals have come across something unexpected….International Justice Mission. Here’s the thing about IJM: They. Don’t. Go. Away. No matter what. They will show up as many times as it takes to ensure these two face justice. It was disappointing to hear the case was delayed again but was a tremendous insight into IJM’s resolve. Relentless pursuit of justice takes on whole new meaning when you see that a LARGE part of this relentless pursuit is the tedium of preparing and showing up time and time again, never knowing if your case will be heard that day or not. I imagine it is deflating at times. I wanted to hug the whole legal team and tell them: “Hang in there! Don’t be discouraged. The work you do is vital to changing the entire justice system of this country and to letting perpetrators know they CAN’T get away with it…no matter how many times they delay hearings.” Of course, they know this, far better than I do. I don’t think I exaggerate when I say: Therein lies the hope for the children of the nation. Untold numbers of future children in the Dominican Republic will owe their safety to the steadfastness of IJM’s legal team.

When the meetings, discussions, dinners, and camaraderie of the trip were at an end, Andy and I had two days to decompress in the Dominican Republic. We shelved our mental and emotional processing to explore lakes in caves and spend a day jumping and sliding our way down waterfalls with twenty-five grumpy Russians. It was a much needed reprieve from the intensity of all that we learned.

The portions of the trip that evoked a stronger emotional response took precedence in the two days I had stateside to process before real life intervened. I knocked out a couple of blog posts and then whipped up some Thanksgiving sweet potatoes. But as Thanksgiving transitioned into decorating the house for Christmas, helping kiddos with homework, and catching up on laundry, two things continued to percolate: Those eyes. The eyes of the mother that have come to represent to me the magnitude of brokenness in our world. It would be easy to let this be discouraging if it weren’t for the second thought; The lawyers…and for that matter the entire IJM team in the Dominican Republic whose faces have come to represent to me all of IJM’s teams who work tirelessly around the world to turn the tide. Collectively they Rescue and Restore the vulnerable, Restrain the hand of violence, and Repair broken justice systems. Having been to the field, it’s no longer an organizational “What We Do” slogan. It’s the faces of those who do it, day in and day out.

Since returning home I have struggled to put my finger on the biggest takeaway of the trip. Today it hit me. It has taken me FAR more than two words to get to this point but ultimately, the entire summary of the trip can be shared with just two words: It Matters.

I shared in my first Accidental Advocate post that I am very aware of how small my role is in the fight against slavery. It’s easy to start thinking, “I’m not a lawyer, counselor, or investigator. What do I even have to contribute in the scope of the problem? Does me caring about this even matter?”

Maybe you’ve wondered the same thing. You’ve heard that you can be a Freedom Partner for just $24 a month and you think, “Does so little really matter?” I can tell you, it does.

That $24 can buy a tank of gas…so that police officers can get to Puerto Plata to rescue children and arrest those responsible. Or for the After Care team to make necessary visits to survivors and ensure their needs are being taken care of. Or for a lawyer to show up at the court house month after month until justice is served. These dedicated people serving on the front lines are vital to the work and so are you. They quite literally cannot do their work without the resources to get it done. Giving Matters.

Maybe you already give and you care deeply about the work but have been afraid to speak out about it. There have been times when, perhaps, I could have said something and didn’t for fear of being that person. I also was not confident in how to share effectively. It has been a learning process for sure. I’m still honing how I share (and I shudder for the poor people who had to listen to me blunder through passionate but scattered explanations of IJM’s work early in the process) but I’m slowly finding my voice. Recently someone told me that, after reading one my posts about our experiences in the Dominican Republic, she and her husband have decided to direct their year-end giving to IJM. I kind of wanted to cry. A direct result of sharing is that someone else will be rescued?? That showed me, it doesn’t matter how imperfect you are at sharing: Advocacy Matters.  Over 40 million people in slavery is an overwhelming statistic but there is a solution that WORKS. Over a four year period, IJM was able to prove a 79% reduction in the number of children available in the sex-trade in Cebu. They were able to replicate it with 76% and 84% reductions in other cities. That’s exciting news!! Don’t be afraid to share it! Someone might be moved to give and someone still waiting to be rescued will move from slave to survivor.

Last, the two tenderest moments of the trip for me involved prayer. They were the only times I teared up the entire trip.  I listened to the prayer requests of those who work for IJM and of survivors. I saw the earnestness in their faces as they shared personal challenges and I knew that prayers for the work, workers, and survivors, are more than a box to check off during my daily prayers. As we bowed our heads and prayed, some in English and some in Spanish, I was acutely aware that Prayer Matters. It means a lot to them to know they are cared for and prayed for by people across the globe. They may be the ones on the front lines but they are not alone. They may be walking a difficult journey to healing but they are not alone. One of the greatest acts of service, caring, and love we can do for them is to continue to hold them up in prayer. Prayer also matters for us.  It reminds us whose work it really is. The weight of this is not on our shoulders. This is God’s work, his world in which to restore shalom and we are invited to join him in this work.

Whether you give to help the vulnerable, speak on behalf of those who have no voice, or lift them up in prayer, It Matters.

I am reminded of Matthew 25:40 “Truly I tell you, whatever you did for one of the least of these brothers and sisters of mine, you did for me.”

So next time you wonder if you joining the movement to end slavery would really make a difference, be assured that it does. Here are some faces you can keep in mind whose work on behalf of the most vulnerable is directly affected by every person who decides to join them: 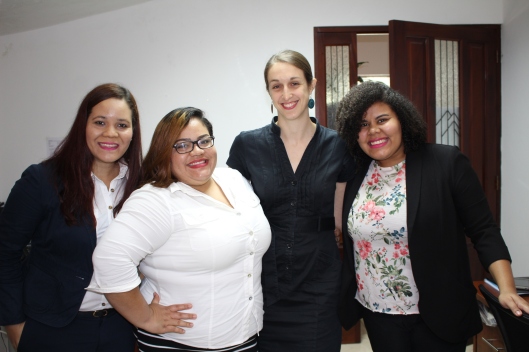 I would be remiss to tell you all this matters and then not give you a chance to get involved (if you are not already.) So here are a few ways you can engage:

If you’d like to become a Prayer Partner and receive weekly updates on the successes and needs of IJM’s field offices around the world, you can sign up here: Prayer Partner

Want to host a casual gathering of friends, coworkers, and neighbors who may want to learn more about modern-day slavery and how it can be ended in our lifetime? Not fully comfortable talking about it solo? Contact IJM or leave a comment below and I’ll happily put you in touch with the IJM people from your region.

However you choose to get involved: It Matters.

They see both sides of the equation. The darkness of what’s been done to these children, the joy and light …

They are the face of rescue but survivors will only ever know them as another potential perpetrator, seeking out young …

Turns out I had lettuce in my teeth. So, there’s that. Nothing says classy like food stuck in your teeth …

This was, hands down, one of our favorite days of the trip. And it was a day that almost didn’t …

I’m pretty much just going to let the photos speak for themselves on this experience. What’s not to love about …

Martial Glacier is easily the most popular hike in Ushuaia, probably because there is easy access, it offers great views …

This hike is why people go to Tierra del Fuego. Okay. Not this hike, specifically, but hikes like this. Hikes …

Our first full day in Tierra del Fuego was PENGUIN DAY! I’ll save information about the tour for the very …