I got this recipe from my mother’s sister’s niece’s cousin’s former roommate. Okay not really but it would be just about as confusing to explain so I won’t bother. Suffices to say that it’s not originally mine and I have no idea of it’s actual origins but it is by far the BEST pumpkin pie I’ve ever had! Andy’s responses when I make this pie include the following:

“I forgot you make THAT pumpkin pie!! I need to eat pumpkin pie tonight until I feel bad about myself.”

“I was going to save you some of the pie but it was so good that I ate it all. It’s your own fault you don’t get any for making such good pie.”

and (knowing that the recipe makes two pies)

“You gave the other pie away? Why don’t you love me?”

It also happens to be so easy to make that an 8 year old could do it.  Wait…I have actually had eight year olds make this pie.  When I was teaching, I used to LOVE to find ways to incorporate class cooking projects into our lessons. Fun Friday’s often found us whipping up something from a book we’d read…learning measurement and fractions along the way! At the end of the year I would present each child with a 2nd Grade Class Cookbook with all the recipes we had made throughout the year. This was the recipe we made for our classroom Thanksgiving Feast.   I was positively giddy when a student I’d had came back to me a year or two later and proudly told me “We had Thanksgiving at my grandma’s this year and I made the pumpkin pies!”

One of the things I love most about this pie is that it does not have a traditional pie crust. I don’t like pie crust. You can argue why you like it until the cows come home and you still won’t be able to convince me that it is anything but a tasteless cardboard-like vehicle to get the good stuff into your mouth. This pie has a top crust made of cake mix and butter. Yes, you heard me correctly. So when I first tried this pie at a Thanksgiving I was attending in college, it was love at first bite. Without further ado I give you:

Pumpkin Pie to Die For

Mix the first 6 ingredients and pour into 2 glass pie dishes.

A 9 1/2 inch pie pan will ensure you have enough room for the top crust. Though the recipe calls for glass pie dishes, I’ve made them in disposable pans to give away and it works fine.

Sprinkle each pie with 1/2 box yellow cake mix. I don’t always use the whole box (though I do use most of it). Just make sure each pie is covered nicely and discard the rest. Sprinkle 1/2 cup chopped nuts on top of each pie.

Drizzle each pie evenly with the butter (3/4 stick melted butter per pie).

Bake at 350 degrees F for 1 hour. If you live at high altitude it will be done about 5-7 minutes sooner. There are no words to describe how how good your house will smell while it is baking! 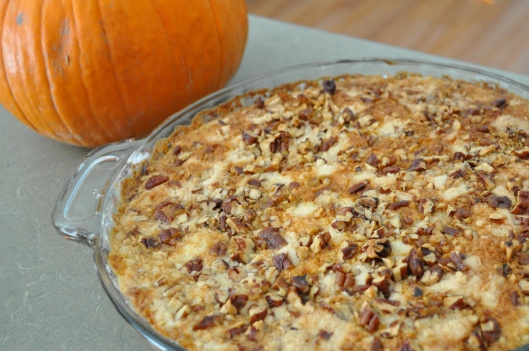 6 thoughts on “Pumpkin Pie to Die For”