I will admit it, I am eating my words. In fact, this post is for Therese Tee who tried once to convince me that pie crust was awesome and I would have none of it.

I don’t know if this recipe is actually that much better than other pie crusts or if I’ve just never really had great pie crust before….but seriously, you need to make the Cook’s Illustrated Vodka Pie Crust. I couldn’t tell you what possessed me to try it since I’ve had a 36 year aversion to pie crust…maybe it was reading the Little House on the Prairie series to Trin and all the homey food described in those books. You can’t tell me you’ve never read a book and wanted to eat the food they described. Whatever the reason I decided to give it a go, I can tell you it was worth it.

You can find the recipe here:

Don’t forget to put your butter, shortening, AND vodka in the freezer for a good long while before making it.

I’ve used this crust to make quiche with amazing results. Quiche was a heretofore unknown food group in our home. Now, thanks to Cook’s Illustrated it will make appearances on our table to warm us up on cold Fall and Winter nights. Yes, you heard that right. It’s a dinner in our house. Andy, loves brinner.

Most recently I used it for this Fresh Berry Crostata. Do you know why Crostata’s are so awesome? Because they are basically a pie without having to try to make your pie crust look all pretty and perfect. Put the fruit in the middle of the crust, fold the crust up around it, and you get the perfect dessert! Beautiful, delicious, no muss, no fuss. My ideal recipe basically. I can’t believe I’m saying that about a recipe that involves pie crust. It may take me a while to come to terms with the fact that I’ve made peace with pie crust.

I wonder how many times I can use the words ‘pie crust’ in one post. Would you believe me if I told you I’ve already cut it down a few times since rereading this?

Sprinkle the arrowroot powder and sugar mixture over the pie crust, leaving about one inch around the edges plain.

Pile those gorgeous berries on: 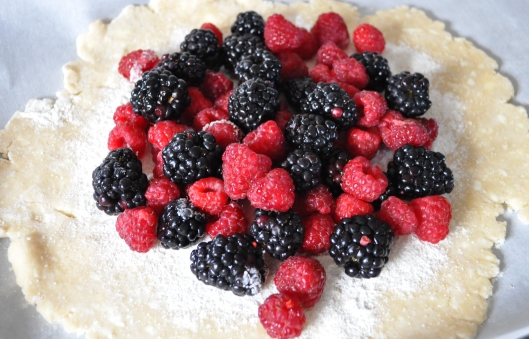 Fold up the edges of the crust, crimping/tucking as needed.

Brush the outsides of the dough with the beaten egg. Then sprinkle the top of the whole crostata with the remaining sugar. Make sure the crust gets a good sprinkling of that sugar. 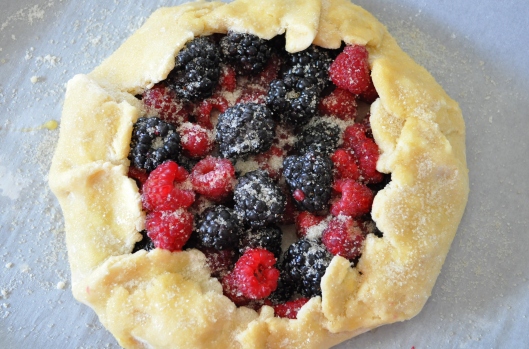 Pop it in the oven for about 35 minutes. When you remove it from the oven, the crust should be golden. Slide it onto a cooling rack. Serve warm or room temperature. Top with Creme anglais, ice cream, whipped cream…or like we do: straight up.

This recipe makes one serving. 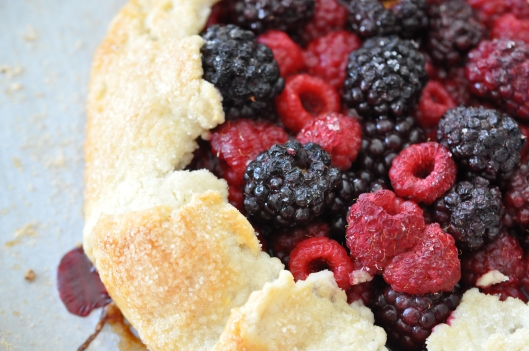