Trinity recounts her trip. Written exactly as she told it:

On Monday we went to The Burren and saw a really old church and a Celtic Cross.

Next we went to a fort that we thought we were going to see but instead it was closed and we saw a cow and her mommy and we took a picture of it and the cow looked at the camera and smiled. What also was funny about the cows is that whenever the mommy did something so did the baby. When we were heading off going into the car, the cows walked toward the direction of our car! 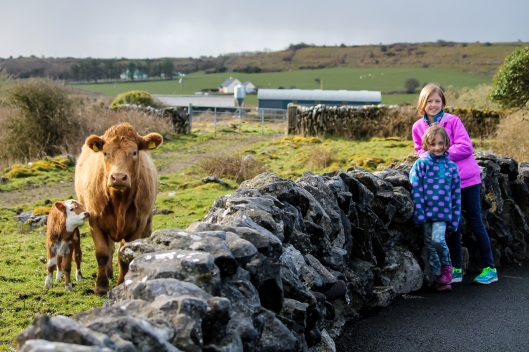 Then we got to see the tomb stones. They were really cool and there were lots of rocks for Lilly and I to jump on and around. It was so much fun! 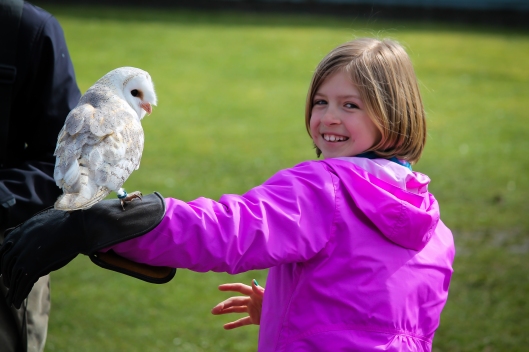 After that we went the Ailwee Caves. I really liked how dark and pretty the caves were. I really enjoyed looking at the stalagmites. Last we went to one of my favorite parts, The Cliffs of Moher. It was really chilly but the site was so beautiful I just didn’t mind it. 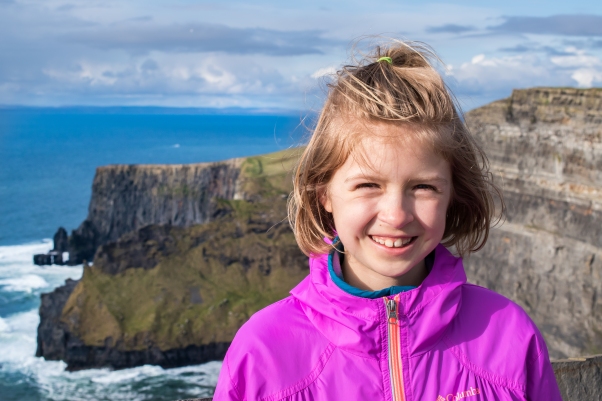 When you looked up on how high the Cliffs of Moher were, the ocean looked so huge and vast. 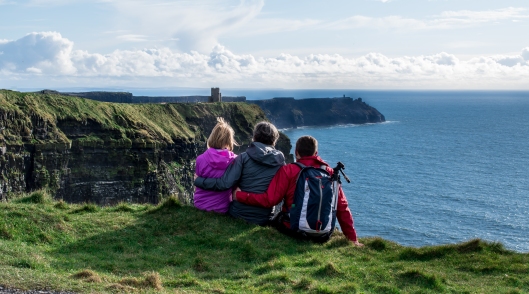 We were really tired so we just decided to head back to the cottage for the night.

On Tuesday we were going to the Aran Islands and when we were in the parking lot to take the boat there, it started raining and raining. So Mommy went out to see if we were still going to go out on the boat. It turns out we were because they said that the waves would be a little bit rough in the beginning but they smooth out by the middle and end.

We had some time before we went on the boat so we decided to go to this nice cafe. Lilly and I and Nate got some hot chocolate. It was the cutest presentation of hot chocolate I have ever had. They had little cubes of chocolate on a stick and they had milk and you just had to wave it around so it would melt in there.

It was time to get on the boat and we were very very nervous. Well, I was. Very very nervous. We sat in the lower deck and the boat started going and it was rocking back and forth.  And the waves were really high and Lilly and I were starting to feel nauseous. But then, of course, Lilly threw up. And luckily before I threw up Mommy took me out to where the fresh air was. But Daddy threw up because he smelled Lilly’s throw up. We finally stopped and I thought it was time to get off but instead that was only the first stop. Our stop, unfortunately, was the next stop.  So we decided to go to the upper deck to get some fresh air. It was way better up there except it was much much colder. That was the only problem. So we froze to death the whole time and Lilly’s lips turned blue! Poor thing! My hands – I felt like I was going to get frostbite but Nate offered his gloves. Finally we got there and our Pony and Trap was all ready but Mommy wasn’t sure if we should take the Pony and Trap or if we should take a van tour because we were freezing cold. But there were blankets and some really nice people to hang out with. So we decided to go on the Pony and Trap and it ended up being pretty warm.

Our first stop to get off of the Pony and Trap was this little hike that Mr. Thomas was taking us on. Mommy and I both thought “Well, I mean, it will be a nice little hike but it probably won’t be as beautiful as some other hikes we’ve been on,” but it REALLY was the most BEAUTIFUL view!! We saw a worm hole. Do you know what a worm hole is? I’ll tell you. It’s when there’s this ‘U’-like shape made out of the beach rocks by the water and the water gushes up in it and it’s so pretty! 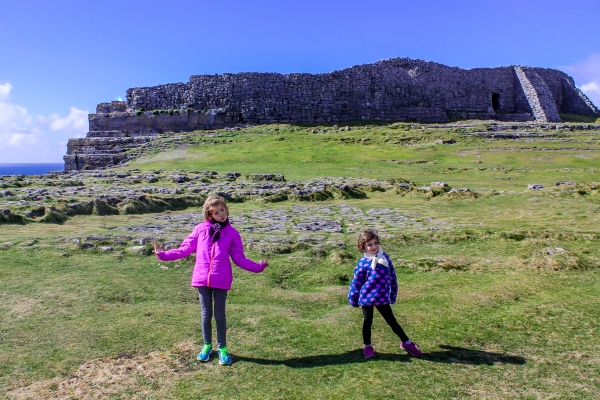 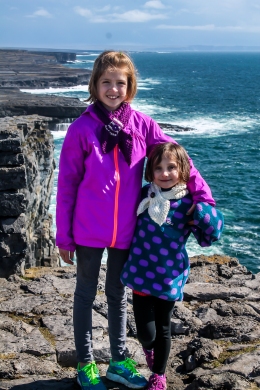 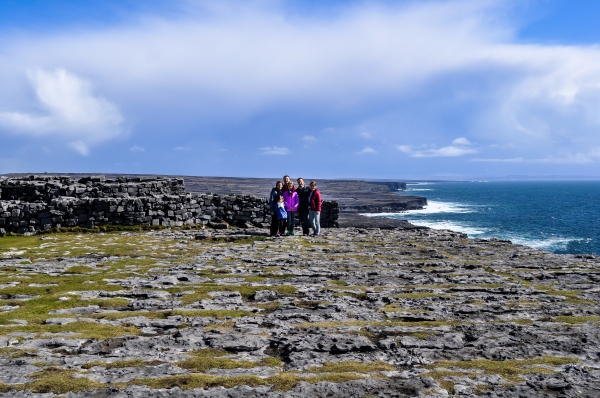 We finally went back in the carriage and we saw some seals.

Also after that I got to help steer Bonnie and Clyde, the carriage horses, which was really fun.

We went on the boat home and it was a lot easier and we had a very hearty meal at Bofey Quinns for dinner, which was delectable. We got to see the village which was also really cool and in this one house, this woman was making biscuits [scones]. The biscuits we had for breakfast, which were really really good, by the way, and we got the recipe.

Next we drove to Killarney National Park.

We saw a really cool waterfall while we were hiking which was in the middle  of our journey to the top.

On our way to the very top of the hike Lilly and I found some Fairy coins. At the top we saw some more waterfalls and it was so pretty.

Next we got to see the new house that we were renting and staying at. I wish I could live there,  honestly!

Thursday. My favorite day!! First we drove to Dingle Peninsula. And there were like Beehive homes.

After that we went to see the Western most point in Europe. Well, it’s still on the Dingle Peninsula. Nate and Jana brought their kite so we all got to fly their kite there. A family told us that they were making the sets for the next Star Wars nearby. So we went to go check it out but we got kicked off because they said “Wait till the movie,” pretty much.

After that we decided to go get some Murphy’s ice cream in the little town of Dingle. It was DE-licious! 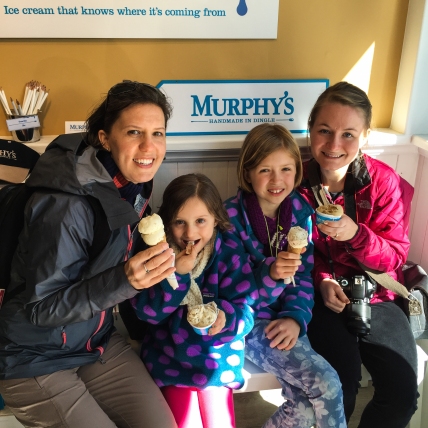 There was a rumor that in a shop there were some Star Wars Dingle shirts. So the tourist office person told us to go to the music shop. So we decided that we would go to the car and pick them up while they [Nate and Jana] go and see at the music store. Once we got in the car we started looking for the music store but we could not find it anywhere. We looked up and down streets, we did circles, but we could not find it anywhere. So Mommy decided to go to the tour office again and the person that was last there was not there this time. And apparently we had the wrong map! So we got the RIGHT map and eventually we found them. Finally! Then we headed back and that was our day in Dingle.

On Friday we were driving from Kenmare to The Mill House in Wicklow. On our way there we stopped at an old old cathedral. Oh, by the way, I forgot to mention it was POURING rain, so we were all freezing cold and didn’t go all the way up. We just snapped some pictures. We all just said, “Well, we got pictures! Now let’s go!” 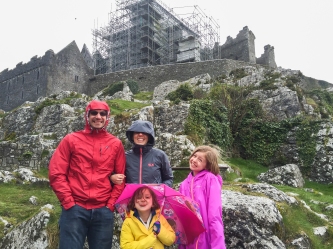 We went to see the Trinity College Library in Dublin. It was really cool and historic. I’m glad that I was named after it because Trinity is a very superior name, I think. So we got to the Mill House and it was so awesome. There’s a river and there was lots of space to color, so we just colored and hung our for the night together. 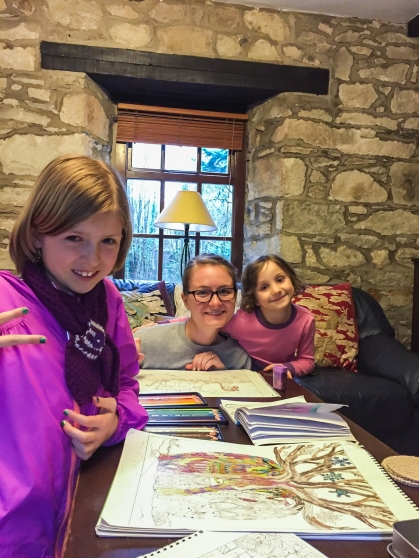 Last but not least, on Saturday we had a very lazy morning. We ate breakfast.  We colored. We read books. When it was lunch time we were going to go this restaurant called “Bates” but it was only open for dinner so then we decided to go to a different restaurant, The Wicklow Heather. It was a really cute restaurant.

Then we went to the old Glendalough Monastery but of course it was still pouring rain so we were getting sopping wet. But the grave yard was really cool. 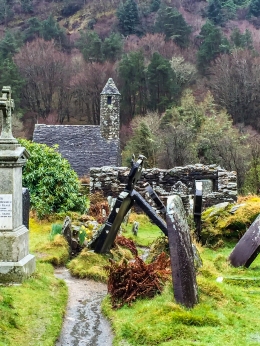 While we were there we went to go see a lake but we didn’t make it because we just decided, “You know what? Let’s just go home and get cozy.” For the rest of the day we just hung out and relaxed.

I really enjoyed Ireland and it gave me a picture of how other people live.

4 thoughts on “Trinity’s Adventures and Excitement in Ireland”