Andy and I just returned from ten days in Patagonia and I find myself sitting at my computer at a total loss for how to begin documenting our adventures. I’ve decided to take a slightly different approach than I normally do. I found planning for this trip more challenging than normal. Detailed information  on the region was difficult to come by. I found that travel blogs were my greatest resource…but many of them were several years old. So I’ve decided to include much more detail in these posts than I otherwise might in hopes that they will help someone else planning their own adventures to the region. If you find all the detail too boring, just flip though for the pictures; they’re pretty fun on their own!

South America was a new continent for both of us. Our flight into Buenos Aires arrived before dawn, so we did not really get our first glimpse until we were boarding our next flight to Ushuaia and it did not disappoint:

I mean, seriously…I didn’t even tweak any colors on this. It was a breathtaking welcome to a country that would take our breath away time and time again.

We arrived in Ushuaia, the southernmost city in the world, after 26 hours of travel. I’ve travelled a fair amount but never have I felt such a palpable sense of excitement when landing. Our plane was filled primarily with French and Australians, most of whom were heading on to cruises to the antarctic. The entire plane of people were craning to look out windows and get their first view of the end of the world.

We were tired but eager to begin our adventures.

MONEY: There is an ATM in the Ushuaia airport. We were able to get cash upon our arrival and also before leaving for El Calafate…but upon our return from El Calafate the machine was out of money. So just know that ATMs do regularly run out of cash. A hitch-hiker we picked up later in the trip told us he had been unable to get money in other cities as well. Many places DO accept US dollars and credit cards are fairly widely accepted but not everywhere. So you’re not totally up a creek if you can’t get pesos right away, but I would recommend getting them when you can because it might not be available later.

RENTAL CARS: It should be noted that you do not need to rent a car in this area. There are plenty of taxi’s or minibuses (small vans) you can hire to get around. However, our personal preference is to rent a car. We love the total freedom and flexibility it gives us. If you plan on renting a car in Argentina and then heading into Chile, just be aware that there is an extra fee involved and the company needs to know ahead of time because there is a whole slew of extra paperwork that goes along with it. We contemplated this before leaving for our trip but ultimately decided to stay in Argentina the whole time. There was more than enough for us to see in Argentina so it wasn’t worth the extra hassle that came with taking a car across international borders.

If you DO drive in Ushuaia, it’s also worth noting that they do not kid around with their speed bumps. They are placed regularly throughout the roads that run East/West (the flat roads parallel to the water.) Some of them feel like they are about a foot and a half high. We saw plenty of cars with damaged bumpers so be forewarned to take it easy on them!

Most rental car agencies have a small office in the airport…but not National (through whom we had booked).  Apparently they normally bring your car to the airport to hand it off but our flight was an hour early. We wound up taking a five minute cab ride into town to the rental office. This was the first of many times that it came in particularly handy that I speak some Spanish. Our cab driver was a very sweet lady who gave us, what proved to be our most helpful tip for driving in Ushuaia: There are no traffic lights in the city. The streets that run up and downhill always have right of way. Ushuaia runs from Beagle Channel uphill towards the Fuegian Andes that surround it. The streets running north/south (perpendicular to the water) can be quite steep, so right of way is always given to these roads. Here is a photo of the city taken from a boat the following day that gives a sense of how quickly the town rises up from the sea: 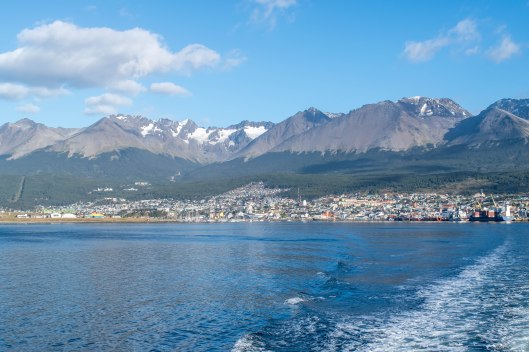 We opted to stay in an airbnb for our first few days. The apartment would not be ready for several hours after our plane landed, so we headed straight for the National Park. We knew this was an area with many shorter and easier trails. In our jet-lagged state, that seemed the best option for our first day. Our timing was impeccable. Some large tour buses were just leaving as we arrived and we had the area almost to ourselves. This photo was taken by a lone Chinese guy with whom we communicated in Spanish as we traded off photo ops:

This sign is by the parking lot where Rt.3 ends. It is literally the end of the road at the end of the world. Off of the main path there is a trail leading into the woods where you can take your walk further if you like. It’s all flat and easy walking. You can view old beaver dams and see some of the damage they have caused in the area.

Wandering through side trails, these trees sounded amazing creaking, swaying, and knocking into each other in the wind.

The weather in Patagonia changes frequently. We landed with clear blue skies and watched the clouds roll in and completely change the personality of our surroundings within a matter of hours. The clouds are as much a part of the beauty as the landscape. They are an ever-changing and fascinating feature.

After walking a couple of trails in the national park our lack of sleep began to catch up with us and we decided to go check into our apartment. It’s not great because it’s through a window but here’s our view from where we stayed:

The mountains across the bay are on Isla Navarino which belongs to Chile. I just loved that we could sit and look out over Argentina and Chile simultaneously. We stayed in the Miralejos Apartments. They are clearly aptly named.

DINING: Most people in Argentina have dinner between 9 and 11PM. In fact, the majority of restaurants do not open until 8PM. We weren’t going to make it that late without falling asleep in our food. Luckily, there was a local market walking distance from the apartment where we could pick up dinner as well as fruit and yogurt for the following morning. And with that we wrapped up our first day of adventures at the end of the world.

Just a heads up: The next post is going to contain loads of penguin pictures. Fairly warned be ye says I.