Turns out I had lettuce in my teeth. So, there’s that. Nothing says classy like food stuck in your teeth while blurting out mid-handshake, “Wait…Jim Martin?!? Like..the BOOK?!?” as it dawned on me that the person whose hand I was shaking is an author I admire. I hadn’t slept in four days and the D.C. humidity does wonders for my hair so I’m certain I had a special kind of crazed-blood-shot-frizzy look about me. Then, just to FULLY nerd out on him, I packed up the offending salad and requested a photo together. He graciously agreed, so here I am with Jim Martin, author of “The Just Church” and Vice President of Spiritual Formation for International Justice Mission: 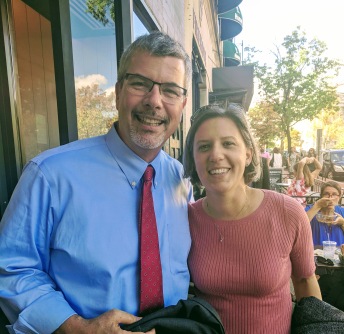 As Jim walked away, I briefly thought, “I can’t believe I just accosted Jim Martin in the middle of Washington D.C. in between meetings on Capitol Hill.” Then my thoughts froze for minute…”meetings on Capitol Hill…..Who DOES that?!?! How did I end up here?!? I’m not important or sophisticated (as clearly evidenced by the aforementioned interaction) but here I am, walking the halls of power in our country, asking our senators and congressmen to appropriate funds to help end Modern Slavery. Am I not the least likely person to be doing this? Until the last forty-eight hours, the word ‘appropriations’ was not a word I have used even once in conversation.”  But these thoughts were quickly swept aside as my team reassembled to head to our last meeting. There were jackets to don, walking to do, and (to my horror) lettuce to remove from teeth.

The day was a swirl of walking, meetings, talking, and adrenaline. Afterwards there were drinks with the other teams and a flurry of finding out how everyone’s meetings went as we toasted a successful Advocacy Summit 2017. We did it! And here’s the proof: 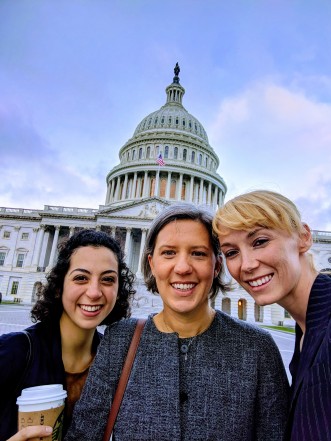 To the young girl whose own mother sold her to be raped by countless men, as she and her boyfriend watched and laughed: We did it for you.

To the child trapped in a brutal brick kiln in India to “pay off” a debt that is not yours and will never be satisfied: We did it for you.

To the young boy enslaved in the fishing industry in Ghana, terrified daily that he will be the next one claimed by the depths of the lake: We did it for you.

To the 40 MILLION still enslaved around the world: We did it for you. We will continue to do it, year after year, in hopes that you YOU will be the next one rescued and restored and your perpetrators held accountable. And we’re not going away. Not until every last one of you are free.

The road that lead me to advocate for you could be attributed to many factors but the simplest one is this: I showed up.

So I shift my narrative now back to those who think they are unqualified for the fight against slavery: If you CARE, you are QUALIFIED.

For Andy and I it was a moment four years ago when we first dared to wade into the heart-rending truth that this was FAR more widespread than we ever imagined. We looked at our sweet, giggly, happy daughters, safe and innocent and we knew we could not stand by while other children are heinously abused.

It would be years, however, before the thought of engaging government on this issue would occur to me. We tried to talk with those we knew and attempted to engage our churches in the work of justice but government advocacy work was for “power-types.” You know, lawyers and Harvard educated people, not a former teacher turned stay-at-home mom. Enter International Justice Mission’s relentless message that, as a partner with them, you are a vital part of ending slavery. I blame them for bombarding me with the message that I could effect real change and for making me feel empowered and capable in arenas I never previously dreamed of entering.

Don’t get me wrong; I frequently find myself feeling wholly inadequate in the scope of the problem. I am well aware of what a peon I am in this scene. But somewhere along the way the seed grew that I could do more. We all have a sphere of influence we can use to make a difference in this world. Our government places the ears of those in power within our sphere of influence by design. It seems crazy every time I think about it but it’s true.

Somewhere along my journey I found myself pondering the very uncomfortable question, “If I know and I do nothing, aren’t I complicit in their suffering?” Which led to a whole slew of questions: Don’t I teach my kids to stand up for those who can’t stand up for themselves? Am I willing to give not just my finances but my time and  energy if it means even ONE more person could be saved from a lifetime of slavery? Am I willing to step into a world entirely outside my comfort zone to engage this issue in a bigger way?

Taking on a role with IJM’s new Volunteer Leadership Team for the Colorado Front Range instilled new confidence and I soon found myself registered for this year’s Advocacy Summit (along with my awesome neighbor!). It has become easier and easier to answer in the affirmative questions like: Am I willing to push past my fear of failure? Fear of embarrassment? To stick my neck out and call others to the fight? I’m getting better and better at handling rejection, let me tell you. But I’ve also found a few people eager to become involved and use their own spheres of influence to grow the movement. That’s a true joy and thrill. To meet someone and know: the movement to save more of the world’s most helpless and hidden just grew. And here’s the amazing thing: ending slavery in our lifetime IS possible.

International Justice Mission has a model that works. Over a four year period, an outside study was able to prove that IJM’s work in the Philippines resulted in a 79% reduction in the number of children available on the streets for sexual exploitation. What’s needed are resources to equip other NGO’s all over the world to join this fight and multiply this type of success.

IJM does amazing work in 20 countries around the globe but the problem is bigger than one organization can fix. Which is why I found myself on Capitol Hill this week. The Global Fund to End Modern Slavery is a Grant Foundation created after the End Modern Slavery Initiative was passed in 2015. It is a joint Public-Private Fund that NGO’s and governments around the world can appeal to for funding to train police forces for rescue operations, provide aftercare for those rescued, and to strengthen justice systems in the countries most heavily burdened by slavery. The United States just released the first $25 million to the foundation a month ago (woo hoo!!!) and the UK quickly followed suit, matching those funds. Other governments are soon expected to make additional contributions as well as private citizens and businesses. The ball is rolling but this fledgling effort needs continued support. In this exciting era of a movement finally gaining bigger momentum, 330 people from across the country, representing 30 states met with their senator’s and congressmen’s offices to request that they continue to support the appropriation of funds to this vital foundation, at the full amount allowed by law in the coming fiscal years.

Not going to lie: I could not have fully explained that to you last week. IJM’s staff put on a full day of training for all of the advocates to prepare us for our meetings. They did an amazing job. And here’s the kicker: Showing up is 90% of the statement you need to make. We heard from a senator on our training day, these exact words, “If you don’t tell us you care, we assume you don’t.” The fact that their constituents were willing to fly across the country on their own dime to ask for their support speaks volumes about how seriously their voters take this issue. If you think you can’t do it, you’re wrong. If I can do it, ANYONE can do it, I promise you. It was a thrilling and empowering experience.

One of my favorite moments of the trip was in our last meeting of the day with the office of Congressman Jared Polis (CO-2nd District). Congressman Polis’s aide, after listening and asking some great questions said, “Well…This seems like a no-brainer.” Hearing him go on to talk about how this is exactly the kind of thing Congressman Polis loves to support had our team leaving the meeting on a real high (no Colorado puns intended).

Here’s the thing. If we hadn’t bothered to show up to tell him about it, there are so many things on their plates, it’s possible this would have gone overlooked. Not for lack of caring about the issue, but for simply not knowing about it. How many more people would respond with “This seems like a no-brainer,” if they only knew?

It’s why I’m more and more willing to get past my fears of what other people will think of me and talk about it, stick my neck out to ask those I know with greater influence or a bigger audience to use it to highlight these issues. You never know who’s out there who really WOULD care if they only knew. The more we speak out and advocate for those who can’t stand up for themselves, the more people become involved and the more lives can be restored. I try daily to take what little influence, ability, opportunity, connections, and resources I have and offer them up, trusting God to do greater things with them than I ever could as he invites us into his work of seeking justice on behalf of the vulnerable.

I am an imperfect advocate to be sure. I have so much learn and am painfully aware of how much more eloquent someone else might be on the topic. (Or less socially-awkward. Gary Haugen probably never gets lettuce stuck in his teeth.) Despite this, I am learning the power of staring down fear and insecurity, and striding past them toward action. Will you join me? 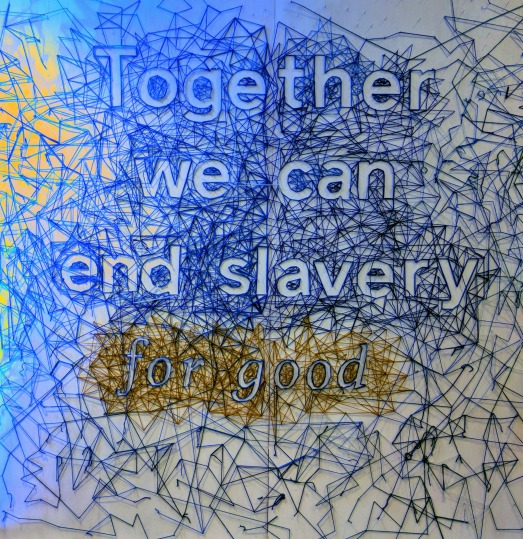 5 thoughts on “The Accidental Advocate”