Two dogs have revered, almost legendary status in the memories of Andy’s family. Actually…there is no ‘almost’ about it.  When arguing the wonderful points of having a family dog, Andy will frequently recount his childhood memories of Wisk. When Andy’s father would go away on business trips Wisk had a special nightly routine.  She would take her place at the top of the stairs each night guarding the hallway that led to her sleeping charges.  She made sure she would protect the family until dad was back in town.  The other is Baron who only recently passed. Andy’s grandmother made all three brothers sweatshirts with hand painted pictures of this beloved black lab in the top corner.  In fact, Andy has never washed that sweatshirt for fear of the picture fading away.  (He’s had that sweatshirt since before we were married and who knows how long before that!) Weird? Yes! Reflective of how much his family loved that dog? Absolutely.

Now that we’ve established a baseline (if not a little abnormal) for the appreciation Andy has for dogs, let’s establish a baseline for mine.  Here is my impression of what dog ownership is like:

They are expensive:  Doctor bills, food, toys, beds, etc. AND if you want to travel you have to pay for a doggy hotel which adds a whole extra expense and headache to trying to travel.

They are smelly: They just are.

They are messy: They shed everywhere and you have to clean up their poop!

They are whiny and they jump all over people.

I know what you’re thinking right now “But Sarah, that’s just like having small children, and you have TWO!”  True…but a dog will not eventually move out and, someday, take care of me in my old age.  The point of having children is to help them become independent.  But dogs?  Well….they are: expensive, smelly, messy, whiny, AND…they make their way into your heart in a special way and then…die. SO to sum up: They are a lot of work and expense and at the end of it all, you get to be incredibly sad and cry.

There’s my baseline. Can you see why I’m not rushing out to the pet store?

So, why would I possibly consider changing my mind? My brother in law, Matt, has been driving across the country moving from Florida to his new Coast Guard post in Oregon.  He stopped to stay with us for a few days along the way and, since he’s moving, he has the dogs with him.  Two labradoodles: Cutter and Maple.  I will admit one of the first questions out of my mouth when Andy mentioned that the dogs were coming was “Are they going to tear our new couches with their claws?”  All I could picture were rambunctious, jumpy dogs clawing our couches and knocking Lilly over in their frenzy.  I was sure I would have ruined couches and a screaming toddler. Andy chose his most soothing tone of voice before answering “No. Sweetheart, millions of people own dogs.  Millions of people who do NOT have torn couches.”

Cutter and Maple have been here for three days now and I have to say, they are exceptionally well behaved dogs.  They don’t jump.  They are very careful around Lilly, who now laughs with joy every time she sees them and happily throws out her arms to pet them.  Trinity has also fallen in love and has to be wherever the dogs are. They don’t bark annoyingly and while they do enjoy a good tummy scratch, they don’t whine until they get one.  They don’t really whine…ever.  Which is more than I can say for Lilly.  Since they’ve been here, I haven’t had to sweep or vacuum once because not only do they not shed….they lick up whatever Lilly happens to drop on the floor.  So, they are cute, well behaved, put silly smiles on my children’s faces, AND they clean my floors!  Oh, and my couches are intact.  As it turns out not ALL dogs are half bad. So…while I realize my husband will never let me forget I said this: I might, possibly, consider thinking about getting a dog. Someday. Maybe. 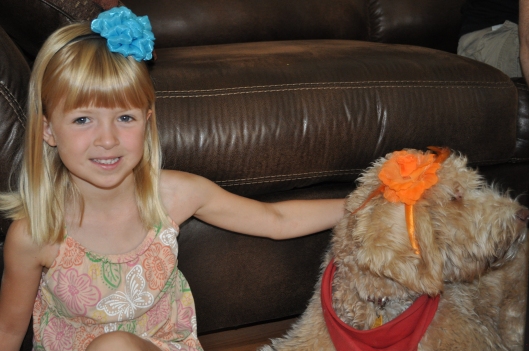 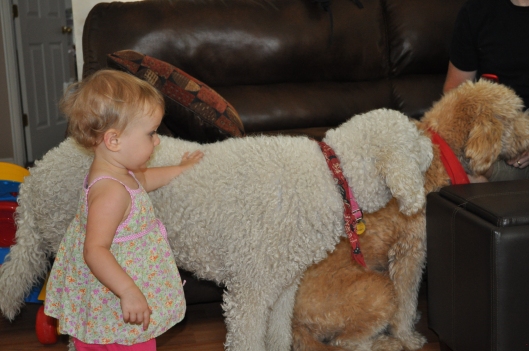