I love the word “rustic.” It can be used to cover a myriad of culinary “oops” and somehow make things seem charming and homey. If you make something that doesn’t quite look how you wanted it to you can simply declare it to be “rustic” and anyone who was about to say “Wow, that’s an ugly cake!” will change their tune to “Oooo, that looks amazing!”

My life was a little messy this week. Lilly was potty training. She is a total rock star at it now, but days 2 and 3 were a little stressful for mommy. Andy may have ordered me out of the house one night just so I could get a breather. Or, at least, that’s what he told me. It may have been that HE needed a breather from the cranky wife he came home to!

Chocolate makes everything better, doesn’t it? Mexican chocolate with it’s undertones of cinnamon and vanilla sounded just right to wrap up this week. I even had the perfect excuse: a friend was having a dinner party and I was to bring dessert. Mexican Chocolate Cake….the ‘Rustic’ part was added later but I’ll tell you about that in a bit…

Modified from a recipe by M. Christine Weber

Preheat the oven to 350 degrees F.

Chop up the chocolate for easier melting:

Any recipe that starts like this is sure to salvage a bad week!

Place chopped chocolate, butter, the caviar from one vanilla bean (or whichever Vanilla option you are using), sugar, and cinnamon in a heavy bottomed saucepan over low heat.

Stir frequently until mixture is melted and smooth. Be patient, don’t be tempted to crank up the heat! (Alternatively, you could do this in a double boiler over simmering water) Remove pan from heat and allow the mixture to cool.

Place 7 eggs in the bowl of a mixer. Then beat until they become pale and thick. I just love that five minutes in a mixer can make the eggs go from this: 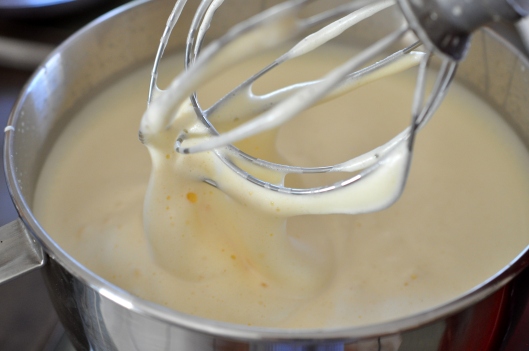 Pour the cooled chocolate mixture into a large bowl and fold in the whipped eggs in three to four batches. Line the bottom of a nine inch spring form pan with parchment paper. Spray with cooking spray. This is where I had the brilliant idea to then coat the pan with a dusting of cocoa powder (2 tsp), sugar(1 tsp), and cinnamon (1/4 tsp): 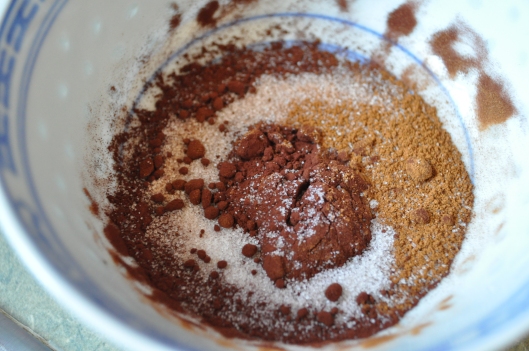 I shook it around the pan until evenly coated:

Pour the batter into the pan: 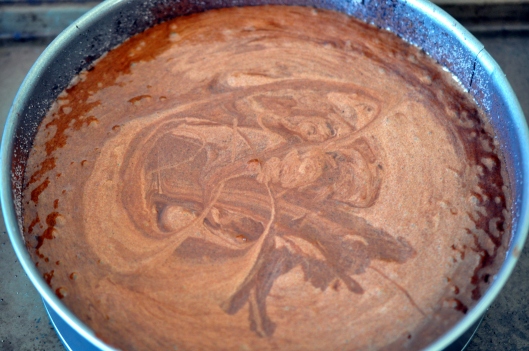 Place the pan on a baking sheet and bake in the oven for 40-45 minutes until a toothpick comes out mostly clean. Allow to cool for 20 minutes in the pan, then run a knife around the edges and remove the spring form edge. Place a plate on top of the cake then invert and remove the bottom of the spring form pan as well as the parchment paper.

My intent was to serve the cake as is. Until a series of unfortunate events left me with a cake that looked like this:

Not even proclaiming it “rustic” could convince people that this cake looked good! And I was supposed to serve it at a dinner party in two hours?!

So I did what any respectable baker would do when desperate to salvage a cake: I decided to make frosting. Frosting would cover up the unsightly exterior of the cake and (hopefully) allow me to preserve some semblance of dignity as a cook. Thankfully that burnt looking stuff on top was not burnt at all but just some kind of caramelization of the cocoa/sugar concoction I lined the pan with. It actually tasted really good, but it looked terrible.

I made a Mexican Chocolate Frosting, adapted from a Julia Child recipe. Being in somewhat of a panic to fix this cake means I neglected to take any pictures of the frosting-making experience but here is what I did:

Chop the chocolate and place in the top pan of a double boiler over simmering water along with the rum and vanilla. Stir until melted and smooth. Remove the top pan with the chocolate from the heat and beat in the butter 1 tbsp at a time. Make sure each tablespoon of butter is completely incorporated and smooth before adding the next. Mix the powdered sugar in by 1/2 cup batches, add the cinnamon, and thin out with milk 1 tablespoon at a time until you have reached your desired consistency.

Halfway through making the frosting I got a message that the dinner party was cancelled. It seems my life is not the only one that was a little messy this week. The hostess had a terrible day and was in no mood put on a smile and entertain that evening.

It suddenly seemed so fitting that the cake was not-so-pretty. This cake was good. I mean, good.  Just like this cake life can be a little messy, but that doesn’t mean it’s not good. It just means we had a rough day or week. Thankfully I’m close enough with this friend that I could crash her house with some chocolate cake and hopefully make her messy day a bit brighter with some messy cake. 🙂

In honor of the theme of this post, it felt wrong to try to stage ‘perfect’ pictures of the cake. It is what it is. Delicious even in all its imperfection, kinda like life. So here are my imperfect pictures of this imperfect cake…which I highly recommend you try; especially if you’ve had an imperfect day.