The experience begins with your choice of cross country skiing or snowshoeing (less than a mile) to a Mongolian style yurt on the mountain. There you are served a chef’s choice five course meal…and the food will not disappoint! I wrote about last year’s experience here: https://sarahsjoys.com/2012/02/12/waffles-skis-snowshoes-andayurt/

This year’s adventure started several months ago when Andy and I were out for a wonderful kid-free evening with friends at Sundance. The topic of the yurt came up and those who had never been were excited to try it out. We picked a date right then.

Here we are about to embark on our adventure:

See the couple leaning down in front? Eric and Cynthia were integral to me reaching the yurt! Having never cross country skied before, I was less than competent! In fact, when the guide asked if I had ever done it before and I said ‘no’ he answered “It’s early in the season so the trail is new and it’s not great conditions. It’s icy and bumpy and hilly. You might want to hike instead.” But being determined to try the full experience I caved to my curiosity and did not heed his advice. It was nothing like downhill skiing. I fell..a lot! I also laughed…a LOT! And had help from the friends who were either smart enough not to ski, or were experienced enough not to fall. It was a blast.

Here we are up the easy part of the trail and about to head into the forest:

The kitchen the chef uses – He preps at one of the restaurants at the resort, brings everything up by snowmobile and finishes cooking at the yurt. There is no electricity. 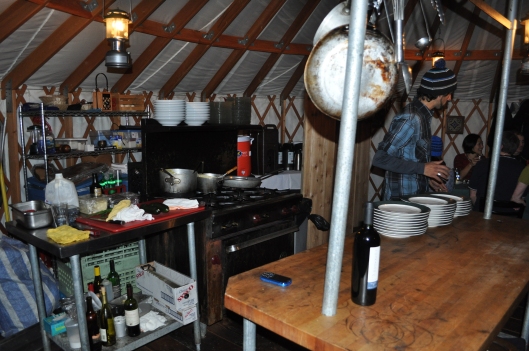 And out of this kitchen came these dishes. They were heavenly!: 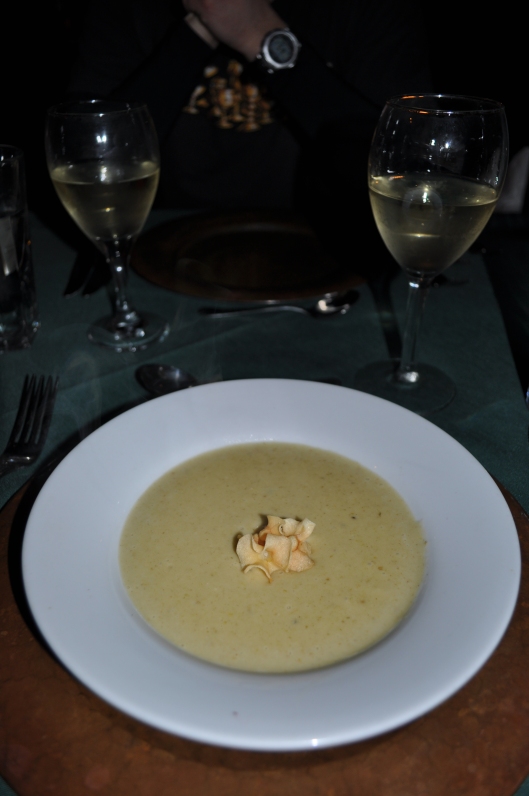 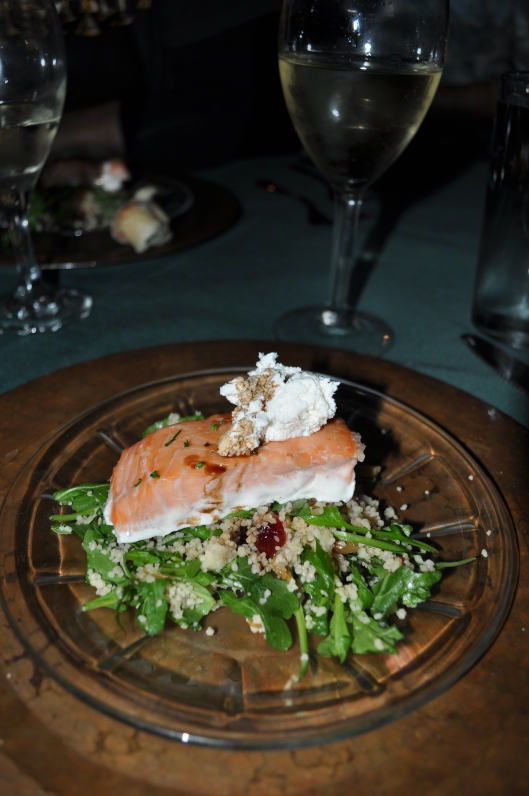 Duck on Duck: Duck Medallion topped with Duck Confit and Huckelberry sauce on a bed of Creamy Polenta:

Blueberry Bread Pudding topped with Butterscotch Pudding. This didn’t look particularly elegant but it was very tasty. I opted for a shot of Chef Joe plating:

Group shot at the yurt: 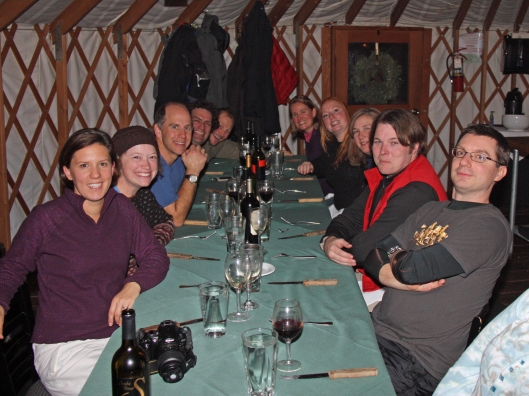 The chef then put on an outdoor fire show! This is not normal..He still had his supplies up there from their New Year’s Eve celebration. I managed to find a setting on my camera that shows the motion: 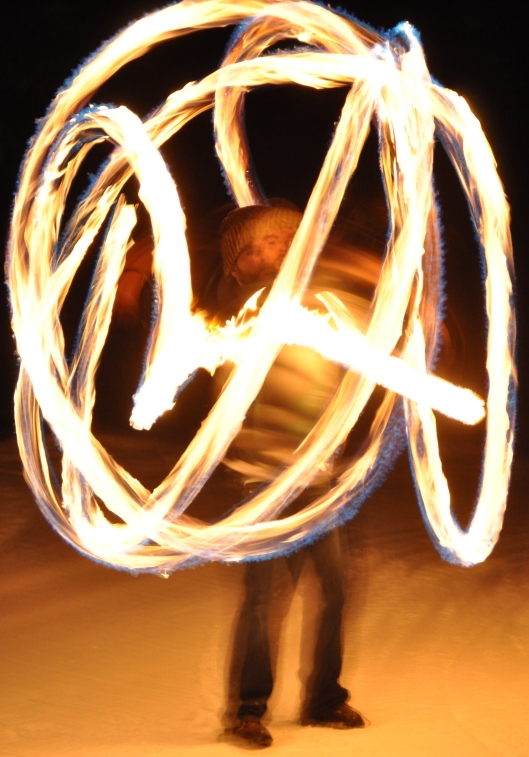 Other shots of our night (A combination of photos from Jamie, Cynthia, and my own):

Eric and Cynthia: My skiing sponsors 🙂

Karla(in black) coaches Kristie in cross country skiing. (They were also helpful on my way back down the mountain!: 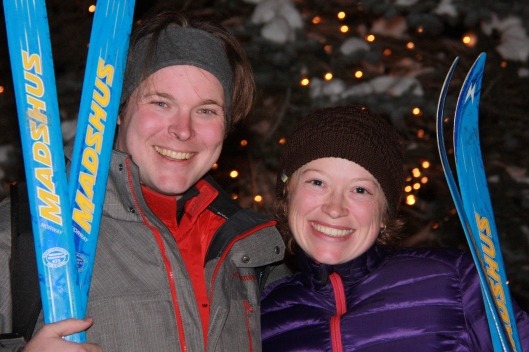 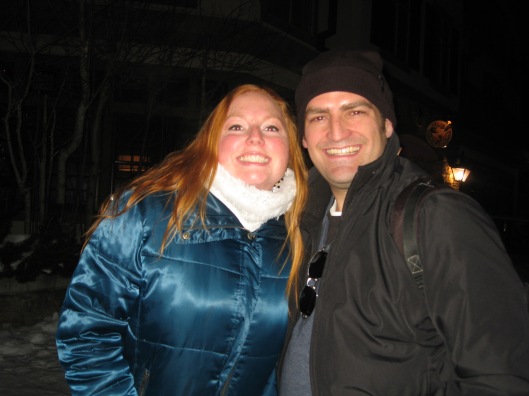 Steve and Jamie present the most expensive bottle of wine I’ve ever tried. (Did I mention you bring your own wine?) It was mighty fine! A friend gave it to them after he performed at a winery and was allowed to purchase from their private, reserve cellars. We’re honored they shared with us!!: 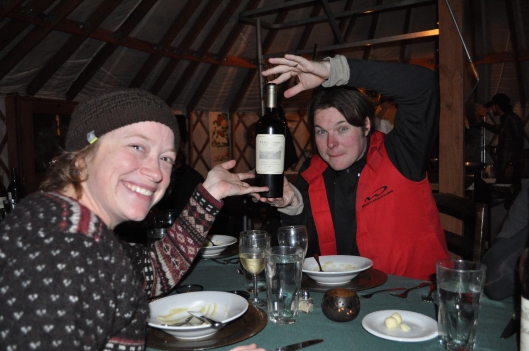 Our contribution to the evening was a bottle of home made Limoncello as a digestive. Recipe here: https://sarahsjoys.com/2012/04/02/limoncello/

We also gave little bottles to our friends: 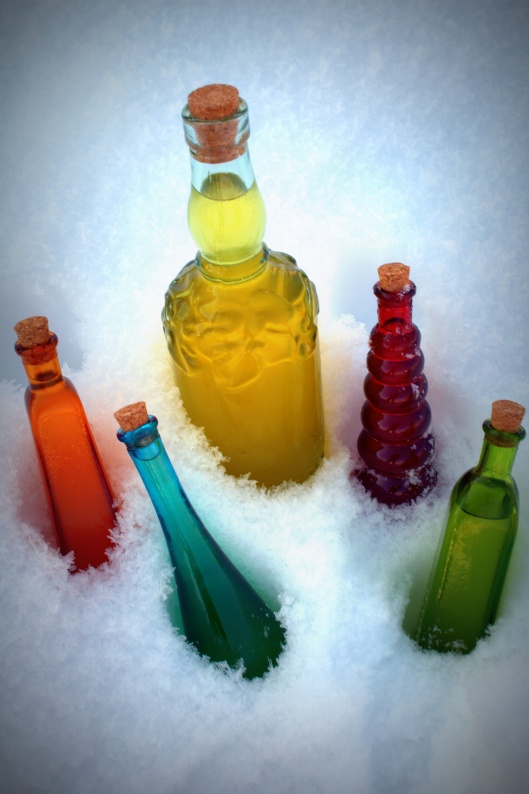 You head back down from the yurt via the ski slopes nearby. I figured that would be the easy part. It’s the whole reason I skied! I knew coming back down would be fun. I didn’t count on the fact that the plastic edges of cross country skies won’t bite into the snow AT ALL. It was like being on steep hardwood floors in soft fuzzy socks. I fell no less than three times! I promised I wouldn’t post any embarrsasing or non-flattering pictures from the night on the web (and there were some funny ones!) but I will set my pride aside and end the post with this lovely shot of myself – skies going straight out from under me. Cynthia, I’m so glad you were able to capture this on camera!

Yes, it was a great evening, with LOTS of fun…but I think next time I’ll stick with snowshoes!!  🙂