Many many moons ago I took a cooking class in Hong Kong. It was called “A Cook’s Tour Through Asia” and featured dishes from China, Indonesia, Thailand, India, and Malaysia.  The dishes I learned in that class are still among my favorite Asian recipes to prepare and among those, the Coconut Chicken Curry is in the top two.

Today’s recipe is an amalgamation of some of the things I love about that recipe learned oh-so-many years ago and a recipe I found just last week on simplyrecipes.com for Mango Curry. It makes me think of that song from Girl Scouts “Make New Friends But Keep the Old.” I paired an old friend with a new friend and they get along SO well. 🙂

This could easily be modified to be vegetarian or would also be great with shrimp. I say go ahead and make a big batch of this sweet and spicy sauce (sans meat) and have a party offering a variety of add ins. Your meat eating, vegan, vegetarian, and pescetarian friends will ALL be happy! Throw in the options of rice or whole wheat couscous and even your gluten free friends can get in on the action.

My apologies there aren’t many pictures. An awesome thunderstorm rolled through as I was cooking (just my luck when I finally have time to cook for a blog post!) and I didn’t get great pictures. The lighting was terrible. I did, at least get one of the end result.

Heat olive oil over medium heat in a large pan. Add onions and red bell pepper. Cook until onions are translucent. Add the garlic and fresh ginger, cooking until fragrant, about a minute. Add about one more tsp olive oil to the pan, then add curry, tumeric, cloves, cinnamon, cardamom, and salt. (We go light on the curry in our house but if you like it heavier, feel free to add more to your preference.) Stir and cook for another minute, then add coconut milk, vinegar, and half of the chopped mangoes. Bring to a boil, then reduce heat and simmer for about 15 minutes.

Working in two batches puree the sauce in a blender (or use an immersion blender directly in the pan). Pour all of the pureed sauce back into the pan. Season to taste with salt and pepper.

Add raisins and chicken to the sauce. Allow to simmer for 8-10 minutes until the chicken is cooked through. Add the second chopped mango to the pan and allow to heat through.

Curry would traditionally be served over rice but I love this served over whole-wheat couscous. Garnish with sliced green onion.

The batch I made today is being frozen for a later date, so I didn’t have a “plated” version to show you. But here is the end result (without the chicken): 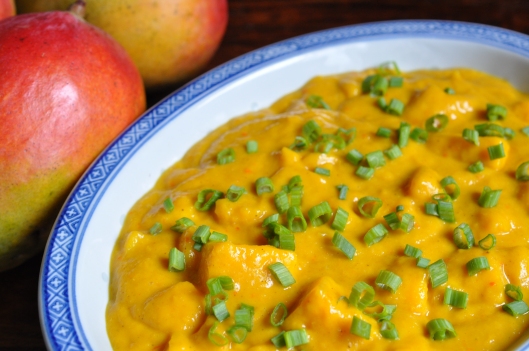 The house smells so good, it’s torture not to eat it now! Maybe I could sneak just a little…