Does this really need any further introduction? The photo pretty much says it all. 😀 My Aunt Sue used to make this when I was a kid….which was a VERY welcome treat when visiting them in the hot and humid Iowa summers. Anything with both ice cream and Oreos is pretty much the epitome of amazingness when you’re a kid. (Not gonna lie to you. It’s still pretty high up there in my book!) Add gooey ice cream toppings and crunchy peanuts and…well…I don’t really have a word for the awesomeness that ensues. I’ve slightly modified the original recipe, which probably makes it even worse for you than the original (shhhhh…) but it IS magically delicious! The modifications were simply eliminating cool whip (I’m not a fan) and using Butterscotch Caramel in addition to Hot Fudge. My cousin says she makes it using mint-chocolate chip ice cream and hot fudge, which sounds heavenly to me. There are as many possibilities as there are flavors of ice cream and ice cream toppings, so use whatever combination strikes your fancy. 😀

I usually only make this seriously decadent treat on the 4th of July. But we had a RATHER big event in the Shaffer household this week. Lilly turned FOUR! Here is the birthday girl, ready to start her day: 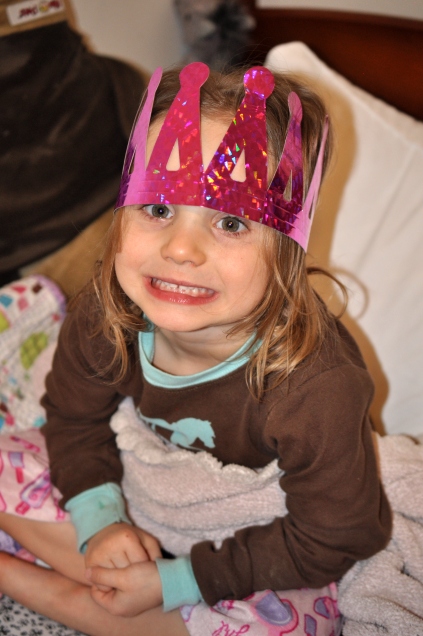 But I promised myself I’d keep her birthday post separate, so I’ll post more pictures of her big day later. 😀  Here is how we made our Oreo Sundae Dessert to celebrate our big girl:

Coarsely crush one package of the Oreos. Enlist help if you can. (Lilly stopped playing dress up just to help. If I’m in the kitchen, she’s in the kitchen! She calls herself “The Chef.”) 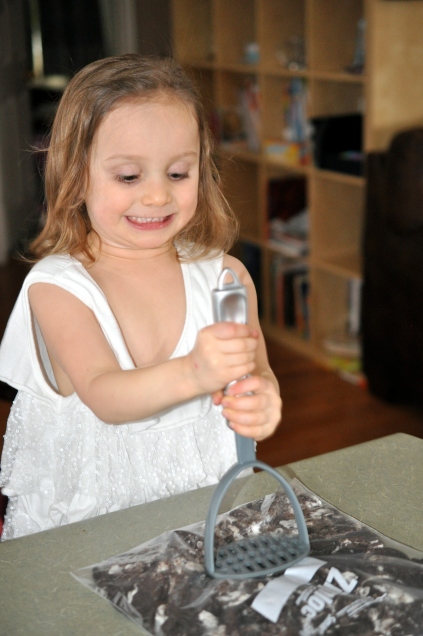 Mix the crushed Oreos with the melted butter. Spread evenly over the bottom of a 9×13 pan. Spread 1/2 of the softened ice cream on top of the Oreos. (Mine was probably slightly too soft but it turned out great in the end.) Here is the Oreo crust disappearing under a wave of ice cream. Mmmmmm:

And now it is totally enveloped:

Place in the freezer to allow ice cream to refreeze.

Warm the Butterscotch Caramel until it pours easily. Spread evenly over the ice cream. Top with roughly chopped peanuts (however much looks good to you).

Refreeze until you are ready to serve. Allow to sit out for about 5 minutes before cutting. I was so excited to dig into this that I completely forgot about the whipped cream we were going to add on top. Oops! Didn’t even miss it though. It was perfect as is: