This was one of our favorite days of the trip. We took the 15 minute ferry ride over to St. John island, and spent twelve hours exploring. I remember seeing an article about the best U.S. National Parks a few years ago, seeing this one listed and thinking, “That looks amazing but it’s in the Virgin Islands I’ll probably never get there.”  Who knew?!

St. John is really quite different from St. Thomas. The atmosphere is more laid back and mellow, the beaches seem somehow more pristine, and it is quieter. We had this awesome older Mitsubishi Montero for the day. (Do they even make those anymore?) It was already kind of beat up with scratches and the interior had seen some wear and tear so we didn’t have to stress at all about damaging it (which is good on some of those crazy roads). It also had a light in the back that would go on and off at random intervals on it’s own at night. “Guys? This light is really starting to creep me out!” Lilly informed us from the backseat. It was a blast. To our surprise, driving there reminded us a lot of Hong Kong. There were winding roads with jungle foliage surrounding you that would open up to views of the island from time to time. Admittedly, the water is much cleaner and prettier on St. John! Here are a few photos from our beach time, small hikes, and historical ruins we encountered:

We hiked up a short path to the ruins of the Denis plantation. This photo is looking out from an old windmill:

After our hike and checking out a few beaches, we settled on Cinnamon Bay to hang out for a while. It was not too shabby of a spot:

Those two little dots above are Andy and Trinity. We didn’t have snorkel gear with us but we did rock the goggles to see the many fish: 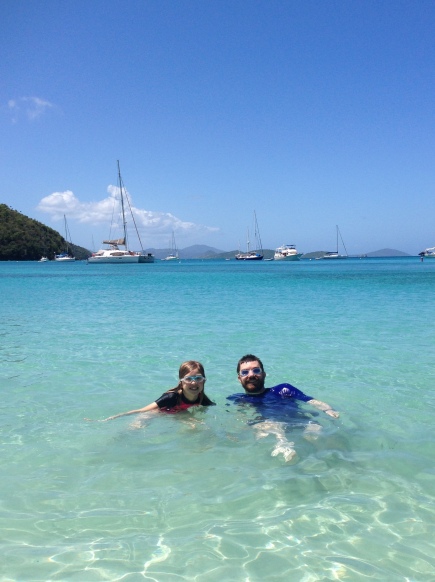 Lilly preferred to play in the sand. She busied herself building volcanoes and sea turtles: 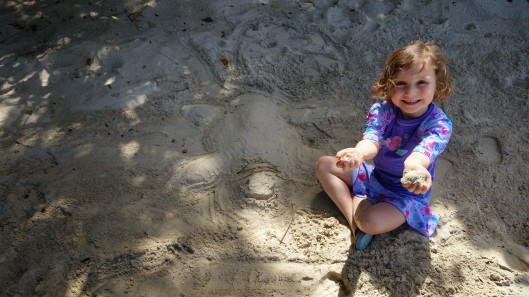 After 2-3 hours of beach time we packed up and drove on to another part of the island. We found another fun walk to take through a mangrove forest. I wish I had a recording of the sounds as we walked through. Between the birds and the wind rustling the leaves and creaking the thin boughs of the trees it was a fun place to just stop and listen every now and then: 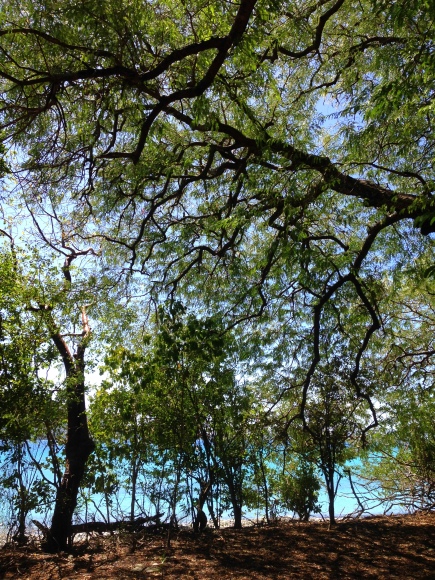 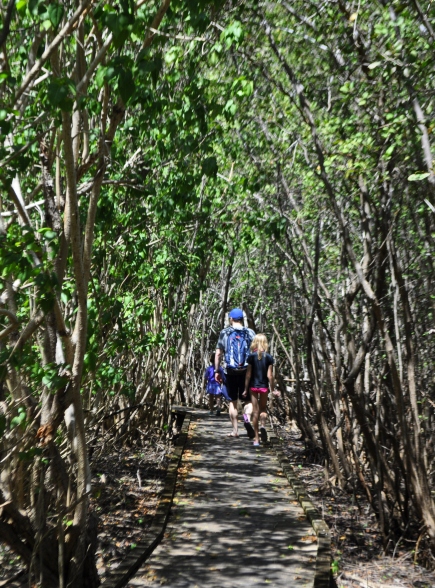 Next we came upon the ruins of the Annaberg Sugar Plantation. It was a Dutch plantation from the late 1600’s. Lilly didn’t want to leave until we read every plaque to her so she would know what every section of the ruins had been used for. This also offered an opportunity to talk about slavery past and present:

This is where we had a little fun playing around with the panorama setting on the phone. Andy started the picture, then we raced around behind him to be in place for when he made it to the other side with the camera:

By the time we were done on the plantation we were getting warm so a quick stop on the shore was in order before piling back into the car: 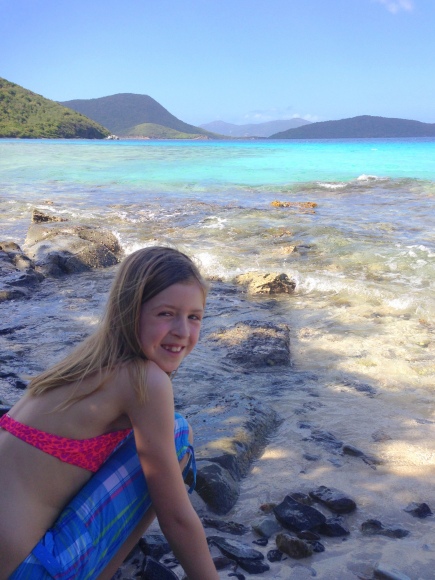 About this time we got in the car and just decided to see where we ended up. That turned out to be the end of the road past Coral Bay to where we hit a dead end! Highlights included insanely steep roads, quiet bays, and wild donkeys. We offered the wild donkeys our apple cores. They were cute, white, shaggy donkeys with soulful eyes! Here we are as far as the road would take us:

We decided to take an alternate route back to the main port so we could say we had truly done the whole island. This found us on a crazy dirt road with “pot-holes” that were more like small ponds. I wish I had a picture because that is not an exaggeration. We loved having the Montero and feeling like we could conquer any road. 🙂 We wound up on a beach where we enjoyed round two of beach time. As you can see, we had it to ourselves.

This is where the fish were VERY friendly and tried to eat our feet and hung out around our ankles. I thought it was awesome. Trin was a little freaked out by it and tried to dodge them by clinging to my back while we laughed hysterically. She eventually headed back to shore. Andy took this picture of us from farther out (with my phone in the handy-dandy water proof case):

Refreshed from the cool water we soon realized we were famished. We headed out in search of food and came across ‘Miss Lucy’s Restaurant’ right on the water. It was the best meal of our trip. Fantastic, friendly service and amazing food. I especially loved that even the kids food is REAL, made-from-scratch.

We eventually made our way back to port, grabbed ourselves some frozen yogurt, and boarded the ferry back to St. Thomas. We enjoyed adventure, relaxation, history, exploration and good food. It was pretty much the perfect day. 🙂